Kirsan Ilyumzhinov arrives in Seoul on a working visit 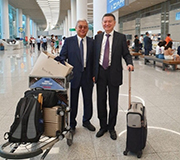 On 9 August, the first president of Kalmykia, the sixth president of FIDE Kirsan Ilyumzhinov arrived on a working visit to Seoul.

Kirsan Nikolayevich held a series of meetings in the Korean Olympic Committee with the President of Korea Chess Federation Ms Hyun In Suk and Vice President Oh Hando. They discussed participation of children from Kalmykia in chess tournaments held in the Republic of Korea.

Tomorrow, Kirsan Nikolayevich will meet with representatives of Korean universities to implement a state programme of grants for students from Kalmykia to study at Korean universities. Good prospects for the participation of Kalmyk students in Korean educational programmes are outlined.

Ilyumzhinov’s schedule also includes a series of meetings with representatives of the Korean business community to discuss cooperation in various projects.