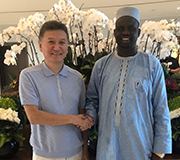 On 2 December, residents of the United Arab Emirates celebrated the 48th anniversary of UAE National Day. The first president of Kalmykia, the sixth president of FIDE Kirsan Ilyumzhinov arrived in the UAE at the invitation of a long-time friend and partner Sheikh Al Nahyan. He will participate in the celebration of Emirates National Day, hold a series of meetings with local businessmen, and discuss a major joint tourism project.

In the evening of the same day, Kirsan Nikolayevich attended a grand firework display in honour of the national holiday, which is a day off.

“I sincerely thank Sheikh Nakhyan for inviting me to this festive event and I heartily congratulate the people of the United Arab Emirates on the national holiday!” Ilyumzhinov said.

You can also watch the video of a national dance on our website.